How does the baby’s heart work during pregnancy? – Niakoro

How does the baby’s heart work during pregnancy?

How does the baby’s heart work during pregnancy? 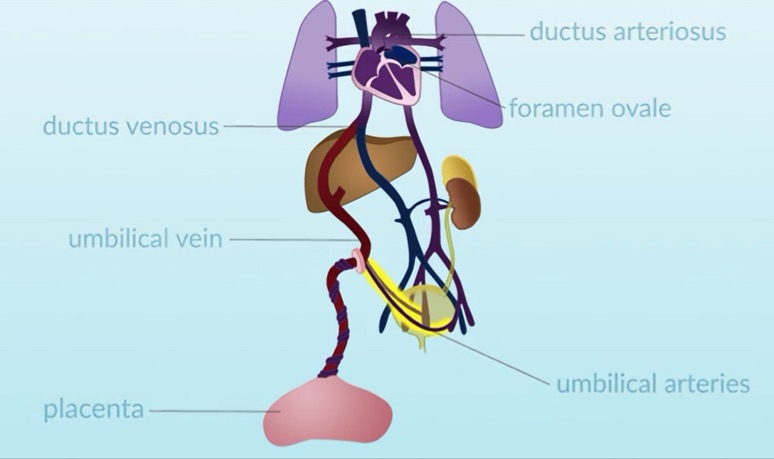 Pulmonary and aortic circulation in the children and adults heart are separated, blood in the the right side (deoxygenated) is pumped by pulmonary artery to the lungs where it is oxygenated and returns to the left side, and it is the left ventricle (LV) that sends blood to the body. In the fetus, both circulations are intersecting, due the lung is fluid-filled instead of air-filled, the vessels in the lungs are narrow, creating higher resistance to blood flow into the lungs and the placenta is actually the “lung” of the baby.

Blood rich in nutrients and oxygen, supplied via the placenta, flows through the umbilical vein to the ductus venosus

What happens when the baby is born?

Once the baby is born and takes a breath, the umbilical cord is clamped and the placenta is removed from the systemic circulation. Immediately, the transition from fetal to postnatal circulation begins. With the elimination of the placenta from the circulation, systemic vascular resistance begins to rise. With each breath, more alveoli in the lungs expand, and the vessels surrounding them dilate in response to the presence of oxygen. Pulmonary pressures begin to decrease. Although pulmonary pressures are lower than systemic pressures, within minutes after birth it is six to eight weeks before pulmonary vascular resistance decreases to normal.

In the postnatal circulation, blood no longer flows through the foramen ovale or the ductus arteriosus. The increase in left atrial pressure after birth forces the septum primum against the septum secundum, functionally closing the foramen ovale. Within three months, the foramen ovale permanently closes as fibrin deposits fuse the layers of septal wall together.

Learn more about the anatomy and physiology of fetal, transitional and post-natal circulation in this video from OPENPediatrics™, an interactive digital learning platform for healthcare clinicians sponsored by Boston Children’s Hospital and in collaboration with the World Federation of Pediatric Intensive and Critical Care Societies:

Autopsy studies in adults indicate that 15 to 25% of adults have a patent foramen ovale which never closed. The shunt via the PFO after birth is usually small. The ductus arteriosus begins to close shortly after birth, once the infant begins to breathe. Normally the ductus closes completely in 4-10 days. For this reason, some babies have murmur first days of life. During pregnancy majority of congenital heart diseases can be diagnosed.

In newborns (after few days of life) or infants (less than 3-6 months) who present heart murmur, should be referred to pediatric cardiologist for evaluation by echocardiography

Please, send an email if you request more information to niakoroweb@gmail.com

Do you want to know more about the innocent murmur?

My son has heart failure

Tachycardia in the child